DFW AIRPORT, Texas, Nov. 2, 2017 /PRNewswire-USNewswire/ — Customers at Dallas Fort Worth International (DFW) Airport will have a new experience during their travels, thanks to new interactive, all-access lounges provided by Coca-Cola.®Two Coca-Cola Entertainment Zones, called “The Bubble presented by Coca-Cola,” give travelers a refreshing spot to relax and recharge before, between and after flights. 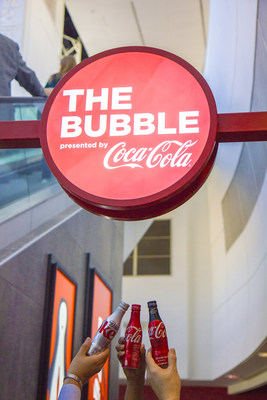 “DFW Airport is proud to collaborate with an iconic, global brand like Coca-Cola to bring this unique entertainment concept to the nearly 67 million people who travel through our airport each year,” said Ken Buchanan, executive vice president of Revenue Management at DFW Airport. “The Bubble presented by Coca-Cola gives our customers two new venues to hang out, charge up and refresh during their travels.”

Travelers can visit the lounges in two of DFW Airport’s newly-renovated terminals near gates A13 and E13, to enjoy entertainment and a wide array of amenities. Each Bubble features charging stations, televisions and vintage Coca-Cola decor, along with modern, comfortable seating.

“Coca-Cola is extremely proud of its partnership with DFW International Airport,” said Bob Sweeney, Vice President of Sales at Coca-Cola Southwest Beverages. “The Coca-Cola Entertainment Zones will give travelers a place to enjoy our broad portfolio of brands, while offering new ways to relax in the airport.”

DFW Airport named Coca-Cola its official beverage sponsor in March 2016. As one of the most recognized brands in the world, Coca-Cola brings a comprehensive package of innovative technology, dedicated operations and cooperative marketing solutions.

“DFW Airport and Coca-Cola are proud to unveil this new concept, which we believe will become a model for airport amenities and entertainment around the world,” Buchanan said.

About Dallas Fort Worth International Airport:
Dallas Fort Worth International (DFW) Airport earned the distinction of the best large airport in North America for customer service in 2016 from Airports Council International. DFW Airport warmly welcomes more than 65 million customers along their journey every year, elevating DFW to a status as one of the most frequently visited superhub airports in the world. DFW Airport customers can choose among 168 domestic and 57 international nonstop destinations worldwide. DFW is elevating the customer experience with modernized facilities and updated amenities, as well as through a $2.7 billion Terminal Renewal and Improvement Program. Centered between its owner cities of Dallas and Fort Worth, Texas, DFW Airport also serves as a major economic generator for the North Texas region, producing over $37 billion in economic impact each year by connecting people through business and leisure travel. For more information, visit the DFW web site.